In May of 2006, Magpie and I attended the last of the US World Cup sendoff games, the one against Latvia in Hartford, CT. Besides having an altogether fantastic time before, during, and after the game (for this is the night that led to the “let’s pester Gooch” story as well as Magpie learning how easily I blush), we wound up in a widely circulated photo of the Sam’s Army section. Over the following days, the photo showed up both on Soccernet and the front page of the Boston Globe sports section, leading to several “media whore” phone calls, emails, and IMs. 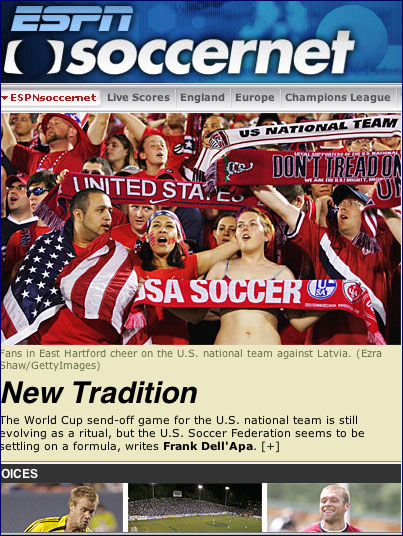 To my left in that photo are Juan and Cynthia, a Queens-based brother and sister team of Sammers and absolutely the sort of people who make being an American soccer fan so damn awesome. If you’ve seen a US game in the northeastern US at any time in the past few years, you’ve seen these two, because they’re always somewhere on tv and the photo agency images of the game. They’re also frequently spotted at the team hotel, collecting autographs and photos of the players who’re nearly always happy to oblige.

About ten days back, we got word Juan had gone to the hospital for blood clots, and that was worrisome enough. Then the real news came down the wire: Cancer outta fuckin’ nowhere. Somehow, sending a card or a bouquet just didn’t seem right. It was time to open the ol’ sewing cabinet and paint bin. 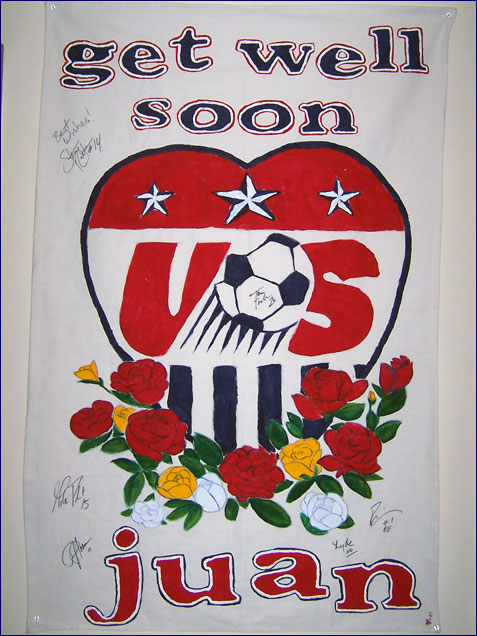 Conveniently enough, the annual Meet the Revs party for season ticket holders was this past weekend, so I had it autographed by all the Rev national team delegates, including Parkhurst because his time is coming we swear. Oh, and Slyde, the Rev mascot, crashed the signing. Mailed off to Juan, along with a stack of those stickers I keep nagging Magpie to write about and of course our best wishes for a speedy recovery. After all, it’s not just the Gold Cup this summer where we’ve gotta see these two again; they’ll be right alongside us in South Africa.