I’ve never liked My Little Pony. Even when it first came out and I was a six year old girl, I wasn’t interested. I lived on a farm–if I wanted to play with a pony, there was a real one in the front yard! Thirty years later, they’ve retooled the series several times, with a new version aimed at the six year old daughters and sons of parents my age. It’s cute and all, but I’m still not a fan; I get the appeal but it ain’t for me.

Except, of course, stupid banners appropriating pop culture themes are for me, and, well…Alex Morgan’s nickname is “Baby Horse.” Then there’s Brek Shea, with his famous hurrdoo and this weird photoshoot he did with a toy donkey. At least I hope that’s not a real donkey; it’s hard to tell what in this photo is real. And then US Soccer finally got it together that the men’s and women’s teams should wear the same jersey (give or take a couple of stars).

All of this–plus the promise of a WCQ cycle starting with an easy driving distance friendly in Toronto–added up to one thing: The silliest banner idea I’ve done yet. I thought about having a contest to see what would pay more: people who would pay me to do it, or people who would pay me NOT to do it. (I may actually sell this after it’s been to a couple more games.) The more I thought about it, the more I just had to run with this for shits and giggles. 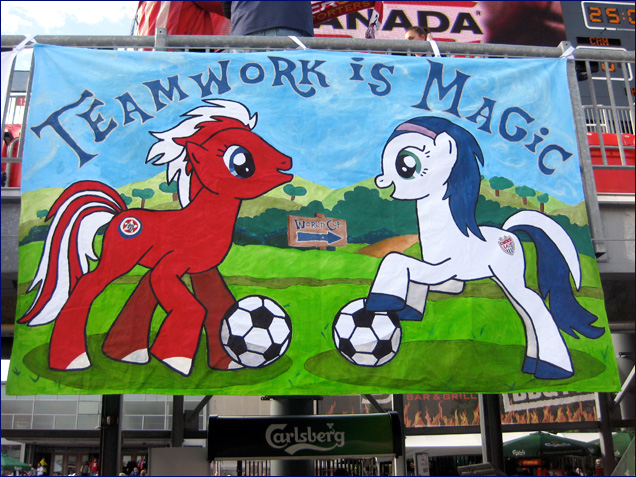 I’m goin’ straight to hell, just like my mama said

Finished size is about 5′ high by 10′ wide, and it was a real bear to do in the available space in my house. Lots of metallic colors used, especially in Morgan’s hair and Shea’s hooves. There’s even a little gold highlighting in the road to the World Cup. Shea is in red, with the Nike snakeball on his flank; Morgan is in white, with the USSF crest (plus two stars for two Women’s World Cup titles, of course) on her flank and a pink headband just like real life. (I saw some people inferring the red pony must be Canada, which, no, of course not! The teamwork here is the men’s and women’s US teams, not two opponents).

At the stadium, the banner got a lot of laughs; postgame, I saw a few complaints about how ponies have no place in football or whatever, based on the occasionally creepy aspects of grown-up pony viewers. That’s your hangup, not mine, as the banner’s not meant to be anything besides a fun pop culture riff. I got a compliment on it from an actual (retired) player who has an actual five year old daughter, and that’s good enough for me. The right people always get it.

This entry was posted in finished projects, goofy, I can't believe we pulled this off, nats. Bookmark the permalink.